A classic example of predator avoidance...
—drawing by Grace Li

If you are a postdoc (and have funding to support your own salary) and would like to perform electrophysiology in our lab with some great undergraduate students, please send me an email.

How is sensory information transformed into meaningful neuronal information?

Research in the Trapani lab is aimed at answering this question by understanding the process of hair-cell encoding. In the auditory and vestibular systems of vertebrates, the hair cell is the specialized mechanoreceptor that transforms mechanical stimuli, including sound waves, gravity, and changes in body acceleration, into sequences of electrical impulses (aka neural coding) that travel to the brain via afferent neurons. For fish and amphibians, hair cells are also utilized by an additional mechanosensory system called the lateral line. In the lateral line, clusters of hair cells form a structure called the neuromast. Located on the surface of the animal, neuromasts occur at regular, repeating intervals around the head and body and serve to detect and convey information about the movement of water near the body. This sense of “distant touch” provides for important behaviors such as mating, schooling and shoaling, predator avoidance, and detection of prey.

We use a combination of fluorescence microscopy and electrophysiology to study the function of hair cells in the zebrafish lateral line. We perform direct recordings from single afferent neurons in the posterior lateral line, recording trains of action potentials (spikes) during delivery of mechanical stimuli to neuromast hair cells. By taking advantage of molecular biology and genetics, we have generated transgenic zebrafish that allow us to use fluorescence to visualize both specific cells and specific proteins involved in hair cell transduction. In addition, we recently created a transgenic fish line with expression of a light-activated ion channel, ChR2 in hair cells. These transgenic fish will allow us to activate either lateral-line hair cells or those in the ear of the fish using flashes of light. Altogether, through electrophysiological recordings combined with optogenetics, we are able to examine sensory hair-cell encoding in intact, larval zebrafish. These in vivo techniques allow us to learn how external stimuli are encoding into the temporal parameters of spike trains in afferent neurons.

Our research goals are to further understanding the hair-cell mechanisms for sensory encoding, and our findings will be important for the treatment of hearing and balance disorders. Importantly, they may also inform the function of cochlear implants, which encode sounds into trains of electrical stimuli delivered to auditory neurons. Furthermore, by combining research on zebrafish behaviors, we are examining how an organism encodes sensory information in order to interact with the world around it. 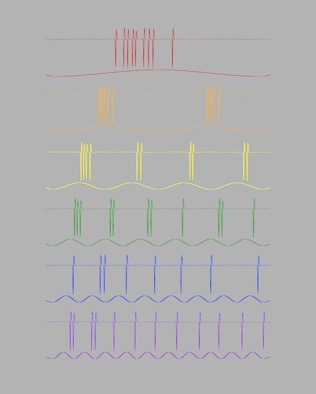 Action currents are extracellular recordings of action potentials (spikes) that are phase-locked to a sine-wave stimulus (matching colored line below recording trace) of varying frequency.

Microphonics are changes in extracellular potential (aka microphonics) recorded at an individual neuromast in response to waterjet stimulation.

Optogenetics is a type or neuroscience where light-activated proteins are used to change a neuron or cell's activity using flashes of delivered light. Differences in action potentials in response to either a waterjet (top) or a flash of blue light (bottom). The blue light activates channelrhodopsin (ChR2), a light-gated ion channel that is expressed in hair cells in the transgenic zebrafish. 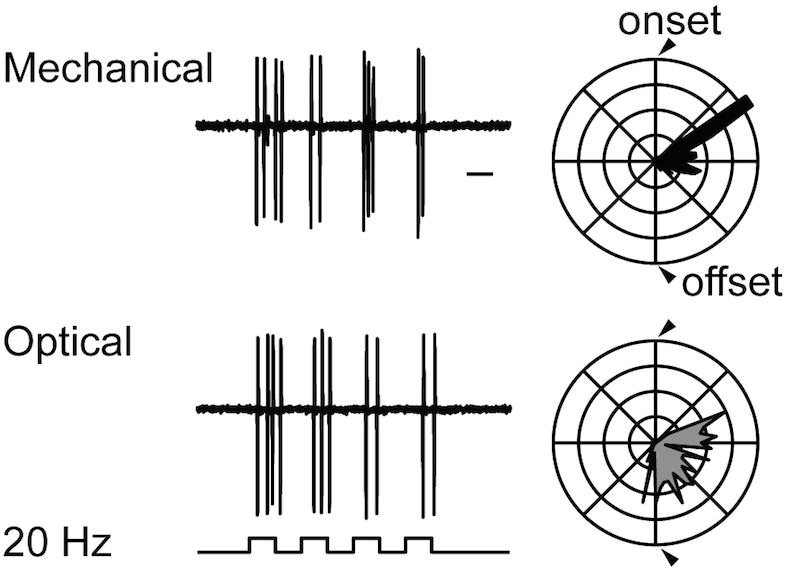 We analyze our data in many ways. Here, during repeated stimulation, the hair cells encode the stimuli more accurately when the source is a mechanical waterjet that deflects the stereocilia. Similar flashes of blue light are not encoded with high fidelity.

Fish startle responses are primarily driven by a pair of very large neurons in the hindbrain known as Mauthner cells (M cells). Field recordings from free-swimming larvae reveal a large potential that indicates Mauthner (M) cell activity as well as coordinated motoneuron and muscle activity during the startle reflex.